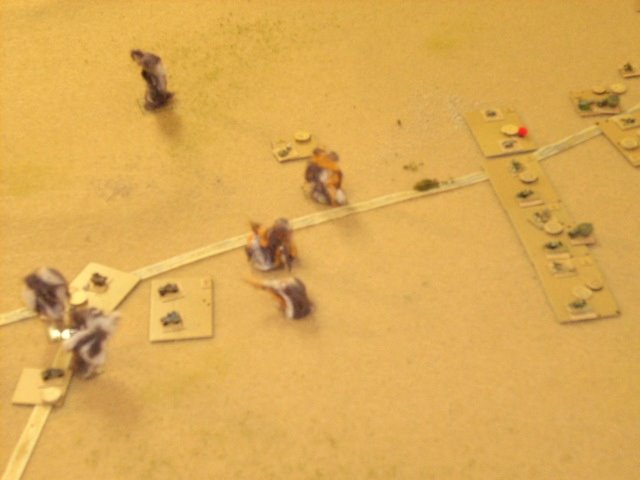 In 2009 I tested a concept of having larger units than a game system envisioned “mounted” lightly on steel sabot stands. Namely, vehicle miniatures that would each represent a platoon in Command Decision magnetized to be placed on a sabot so they could plucked as each became a casualty or one left behind on “overwatch” as the other two move forward on the sabot.

Obviously this could repurposed for game with individual tanks but the sabot might then be a platoon base.

The following was written as the project got started:

Because they are incredibly tiny, the new scale is less expensive and available from www.picoarmor.com. The other reason to start a new scale fresh is that most of my other troops are mounted on green bases (or stands) and the desert is tan. So one can’t just re-use from other theatres to this one.

2. New process of “company stands”. What I mean is that the miniature troops or vehicles are individually mounted on “platoon stands” (each 1 centimeter square magnetic material colored the same as the tan felt terrain). Then 2-3 of these are then assigned to 1×1.5″ company stands. There are also smaller stands, 2 cm. square, that can hold 1 or 2 platoons.

The theory is that these company stands will help make handling the tiny 3mm troops easier, make the unit composition more apparent and possibly speed up the game by moving 3 stands at once. Generally a company moves together so there is no disadvantage to this. However, if a stand or two is being left behind on “Overwatch” then they can be readily slid off the back of the company stand and thus readily identifiable as having not moved.

I liked playing the game on a kitchen table and being able to sit down the whole time. A typical Command Decision 6×9′ board in Centimeter scale being only 72×108 centimeters is only about 29×44″—39.3% the width or length of inch scale. But the miniatures being 20% the dimensions of their 15mm, that meant that the usual scale distortion was reduced by half. You know, where a tank fires from 12″ away and misses.

For each tank’s base I ended up punching out centimeter square bases for the 3mm tanks. This was with a die for an AccuCut machine commonly found in schools (Ellison is another brand). I imprinted Avery full-sheet magnetic material with a mottled desert-colored pattern (call it Butterscotch color) with a tiny ID number (like 1-100) reversed from the pattern (reversed meaning shows white background). The other naturalistic marker I glued to the centimeter bases.

The IDs were not obvious until looked for. I dislike symbols or noticeable. They were really only used to keep companies together when stands were off their sabot and unit density got tight. But that may have only happened once. So maybe an optional feature. I had added to the CD Scenario’s Order of Battle that a given company was made up, say 1-3, another company 4-6 etc.

While okay for a test, the magnet pull strength of the thin, imprintable Avery material is quite weak. Strong enough for a game, but when carried around in badly packed boxes some of the miniatures got jumbled and bases curled. Probably correctable but a shame to have to.

The steel sabots (beautifully cut from WargameAccessories) are of course bulletproof and if painted both sides may last 50-100 years with rust appearing. I intended to spray paint the other side sort of an light Olive Green to match my HotzMats and protect against rust. Incidentally, I had a butterscotch-colored piece of felt that I picked because it looked like Google Earth photo of the Libyan desert. But I could not find spray paint that color so I took the felt into a Sherwin Williams shop and asked them to make up a couple of spray paint cans that custom color. As I remember it was expensive but it matched my felt quite well.

One advantage of the magnet on steel approach is that you can move the minis around in various formations: wedge, blunt wedge, column, line or irregular. A disadvantage of weak magnets, one cannot add any texture to the stand for a nicer terrain feel; not so bad for the desert but not as nice for European terrain. Perhaps with strong magnets the terrain texture wouldn’t be an issue. Actually with Neodymium magnets, terrain texture might reduce excessive attraction of these tiny super-strong magnets. But be forewarned, the magnet might come loose from what you glued it to! Should test fire this idea.

Might help to see some of this, move to the link at the end.

Over the years it has occurred to me that it might simpler and less work to reverse the materials.

*The smallest steel bases from WargameAccessories is Code 16 which is 1/2×1/2″. Depending on taste this might be too big.

I had some really tiny steel bases made up by a local sheet metal shop It took them months for them to get around to making them. When I came in to pick them up, they gave me the impression that they didn’t enjoy cutting them. They said something like, “Here you go. Never come back, ever!”

Another idea to making your tanks’ bottoms “ferrous” is to paint them with a paint impregnated with iron fillings. This probably won’t work unless the base is very flat/flush, not just treads or truck tires. The iron-impregnated paint may not be strong enough. So that’s back to the weakness of the thin Avery magnetic material.

If you want a quick & dirty approach here are more ideas:

And a whole lot more

I took a lot of photos and produced play aids. But I realized that there were some old blog posts from 2009 that I had not brought over from Blogspot to this WordPress version of my blog. So for now I am going to link to that until I get them formatted:

The photos from 2009 are even worse than my current technique.

Terrain is felt on top of a 3/4″ styrofoam insulation board. I cut a wadi into the board so the gully was “3-D”. Under the felt, I placed 6mm thick Foamie hill contours plus 3mm thick Foamie “Rises”. Since my felt was rather thin (unlike lovely Hotz Mats), I had to paint over the styrofoam with a neutral gray, tan or white—I can’t remember which—to keep the pink or green items underneath from showing through.

View all posts by Bill Owen

One thought on “CD Company Stands”

This site uses Akismet to reduce spam. Learn how your comment data is processed.